Pan-Genome PGDBs are a relatively new feature of BioCyc. These BioCyc databases combine in one place information about multiple sequenced genomes for a given species. For example, the Helicobacter pylori Pan-Genome database covers 158 sequenced strains.

The Pan-Genome PGDBs contain one gene object for each orthologous group of genes in the organism. They also contain the union of all metabolic pathways across all the strains. Thus, a Pan-Genome PGDB allows you to quickly assess the full set of gene functions and metabolic pathways across the the known strains.  For example, the gene page shows all orthologs across all strains in the Pan-Genome.  The page for the ftsX gene illustrates this for a gene with relatively few orthologs. 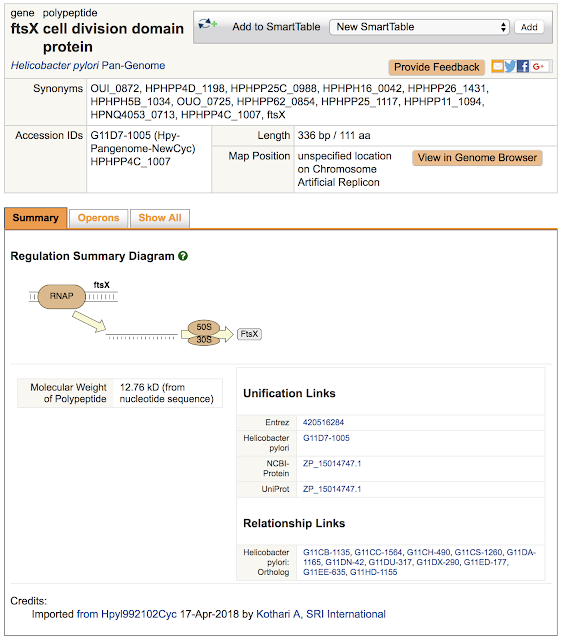 Other gene pages list hundreds of orthologs and synonyms.

You can visit a page for the orthologous genes by following the links in the 'Relationship Links' area near the bottom of the page.

Pan-Genomes provide a way to visualize genes in the genome browser as well.   It's easier to understand this visualization if you know that Pan-Genomes are constructed starting with the PGDB of a base strain and adding other members of the collection of strains one-by-one.  For example, the H. pylori Pan-Genome was constructed by starting with strain 26695.  The visualization is based on dividing groups of orthologous genes into two sets: ortholog groups that include genes that occur in the base strain, and ortholog groups that only include genes in other strains.

Ortholog groups that include genes from the base strain are collected on a 'chromosome' that preserves the location and direction of the genes from the base strain.  The remaining ortholog groups are mapped in arbitrary order onto an 'artificial replicon'.  The names in the artificial replicon display are based on the (arbitrary) order that PGDBs were added to the Pan-Genome.

You can search for genes either by name (e.g., 'abc') or an identifier combining a strain name and id joined with an underscore (e.g., HPHPP11_0013) by entering the name in the search box at the top right.  Either quick search or gene search will take you to the page containing the gene and its orthologs in the Pan-Genome PGDB. 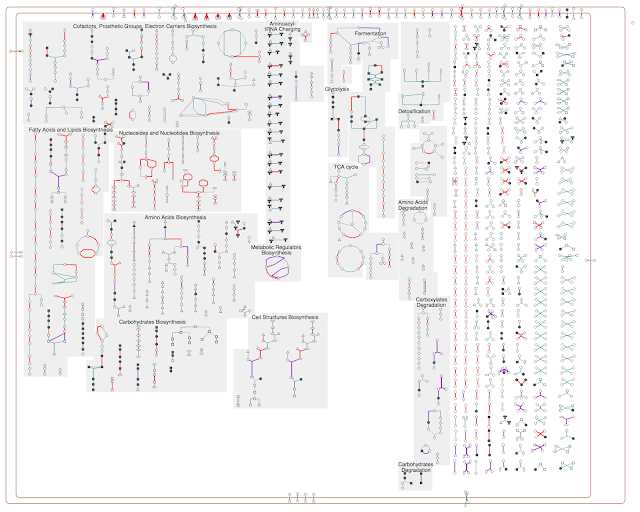 To create a diagram like this on BioCyc web site, select a Pan-Genome PGDB, and bring up the cellular overview. In the operations menu, choose Highlight Genes -> By Pan-Genome Core Genes.  The core genes are the set of genes shared by all organism databases in the Pan-Geneome.  Chose Highlight Genes -> By Pan-Genome Unique Genes, to highlight reactions associate with genes that are unique to a single organism database.


More details on how Pan-Genome PGDBs are created and how to use them are provided here.

Newer Post Older Post Home
Subscribe to: Post Comments (Atom)
Pathway Tools is comprehensive software for systems biology that supports development, curation, visualization, analysis and web publishing of model organism databases. It integrates many different bioinformatics datatypes from genomes to pathways.
Pathway Tools was developed by Peter Karp and his colleagues in the Bioinformatics Research Group at SRI International. It powers the BioCyc, EcoCyc and MetaCyc websites, and is used by hundreds of other groups, worldwide.