Generating a SmartTable of Orthologous Genes Across Multiple BioCyc Genomes

This post shows how, given a list of gene names and/or identifiers from one organism, to retrieve the orthologous genes in a second organism.    For example, this procedure could be used to find the orthologs in EcoCyc of a set of genes of uncertain function in another organism, potentially providing insights about their functions.

The BioCyc project generates a database of orthologous genes between many of the organism Pathway Genome Databases (PGDBs) we maintain.  These orthologs are stored in a central MySQL database that is separate from the individual BioCyc PGDBs.  This post describes a way to retrieve orthologs for a list of genes using a SmartTable.  We don’t recommend generating a ortholog list for a whole genome because of performance problems that, as of June 2018, we are working to resolve.

Since we will be using a PGDB in addition to EcoCyc, you will need a BioCyc subscription (not just a free account) to follow through this demonstration.  Here’s a screenshot of the final SmartTable, which you can access directly here. We will begin with a file of 88 genes from E. coli strain B str. REL606 and determine their orthologs in EcoCyc.  The columns in the resulting SmartTable are as follows:  the list of gene names from the input file, their ‘ECB’ accession IDs genes, the names of orthologous genes from EcoCyc, and  ‘b-number’ accession IDs from EcoCyc.  We also show how to add a column containing gene product names. 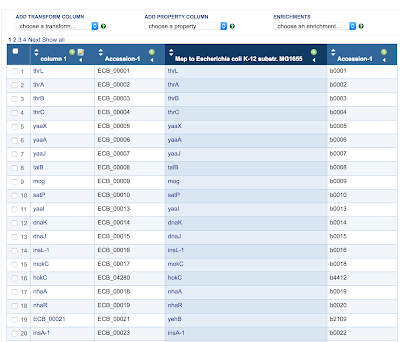 Here is the step-by-step procedure.

1.     Go to the bottom of this post and cut and paste the list of gene identifiers into a text editor such as textedit or atom.  Save the file as 88EcoliGenes.txt.
2.     Go to BioCyc.org and login and use change organism database to change your organism to Escherichia coli B str. REL606.
3.     Open the ‘Smart Tables’ menu and choose the ‘My Smart Tables’ command.  It actually doesn’t matter which of the commands in the menu you choose.
4.     You’ll find the operations menu in the upper right corner of the SmartTables page.  Under the ‘New’ command, you’ll find ‘Smart Table from Uploaded File’.  Choose that command.
5.     In the resulting pop-up window, click the ‘Choose File’ button and select the file you saved out in step 1.  Once you have located and selected the file, review the options below the ‘Choose File’ button in the  upload window.  Since this is a file of gene identifiers, you should keep the ‘Try to make objects of type’ box checked, along with the radio button next to ‘Gene’.  Also leave the other two check boxes checked.  Click the ‘Upload’ button and a new SmartTable with a single column will appear.  If you see a warning message, ignore it and continue.
6.     Add accession numbers for the genes, by locating the ‘ADD PROPERTY COLUMN’ dropdown menu, then choose ‘Accession-1’ from the list.  You’ll see a list of ECB identifiers numbers’ for each of the genes on the first page.
7.     Now that the table has some basic identifiers for the E. coli B str. REL606 genes, you can proceed to adding orthologs from EcoCyc.  Find the ‘ADD TRANSFORM COLUMN’, and choose the second transform ‘Compare – map to other species PGDB’.  That will bring up a pop-up list of species, which will be rather long.  Scroll down through the list until you find ‘Escherichia coli K-12 substr. MG1655’.  Once you have selected the right organism, click the ‘Go’ button.
8.     Now a column containing ortholog gene names appears.  Each entry is linked to the gene page in its organism’s PGDB.  Try it by clicking on thrL, and notice the organism in the upper left of the gene page.  Clicking on the browser back button will take you back to the table and restore the current PGDB to EcoCyc.
9.     To add a column containing accession numbers of each orthologous gene, select the ortholog column by clicking anywhere in the column header except where the title is displayed.   When the column is selected the header turns darker (and the ‘Gene Name’ column lightens as it is no longer the selected column).  Then, as in step 6,  choose ‘Accession-1’ from the dropdown below ‘Add Property Column.’  A different list of accession numbers appears.  Notice that both lists of accession numbers are simply strings that don’t link to any genes.  A column of product names for the orthologs can be added in a similar fashion.
10.  Finally, suppose you were interested only in those B strain genes having orthologs in the K-12 strain. To remove genes lacking orthologs, select the third column (‘Map to Escherichia…’).  Now look over to the operations menu on the right.  Select the ‘Filter’ command. A  pop-up window titled ‘Column text-value filter’ will appear.
11.  This dialog has a series of options chained together in a ‘sentence.’  In the second drop-down, change ‘a copy of …’ to ‘this SmartTable’.  In the third option, choose ‘contain an object’.  Click the ‘Go’ button.  You should be left with a SmartTable containing 84 rows, the B / K-12 strain ortholog pairs, as shown in the screen capture at the top of this post.
12.  Finally, you can save the results to a file by selecting the Export command from the Operations menu.  Choose ‘to Spreadsheet file’ and since all of the genes have names in column one, you can save as common names rather than frame IDs, which are more readable in a spreadsheet.

As always, I welcome your questions and comments below.

Here is the example data.  Cut the area between the horizontal lines and paste into a text editor, such as textedit or atom, and save the file as 88Ecoligenes.txt.


Posted by Midford No comments: Links to this post

Email ThisBlogThis!Share to TwitterShare to FacebookShare to Pinterest
Labels: orthologs
Newer Posts Older Posts Home
Subscribe to: Posts (Atom)
Pathway Tools is comprehensive software for systems biology that supports development, curation, visualization, analysis and web publishing of model organism databases. It integrates many different bioinformatics datatypes from genomes to pathways.
Pathway Tools was developed by Peter Karp and his colleagues in the Bioinformatics Research Group at SRI International. It powers the BioCyc, EcoCyc and MetaCyc websites, and is used by hundreds of other groups, worldwide.